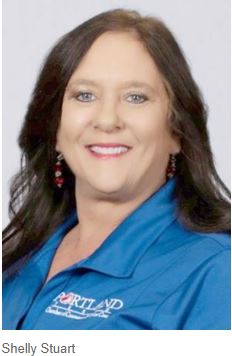 When President and CEO of the Victoria Chamber Randy Vivian decided to move to Austin, that left a seat on the TCCE board — a seat Stuart was ready to fill.

“I had been telling them for about five years now that I was interested in serving on that board,” Stuart said. “The next thing I know I got an email asking if I was interested.

“They said I was doing good work and asked if I had the time to serve on the board. I told them I did not, but I was still very interested,” she laughed.

Stuart received her tenure award last year for her 15 years of dedicated service to the chamber of commerce industry. She earned the U.S. Chamber of Commerce Institute of Organizational Management professional designation in 2012 and celebrated her second year anniversary with the Portland chamber in January.

When asked if taking the position was a big deal to her, Stuart replied, “It is for me,” she laughed. “It’s like your chamber here but for the whole state. There’s more than 500 chambers in the state of Texas, and I don’t know the percent that belongs to TCCE, but it’s a big majority of them.”

She said that she had her first virtual meeting last week and, besides a few technical glitches, everything went well.

She added that she’s unsure of what to expect right now as the COVID-19 pandemic has caused them to cancel most events for the foreseeable future including their annual conference. She’s also had to catch on quick as numerous plans are already in the works, and she’s coming on in the middle.

While the TCCE is much larger than the one in Portland, Stuart is ready to take on the challenge.

“One of the biggest things I’m excited about is getting Portland more recognition in the industry,” Stuart said. “This is a great group of people, and I’m excited to be working with them. I’m excited for the learning opportunity, for the networking opportunity, and it’s something I’ve been looking forward to for years.